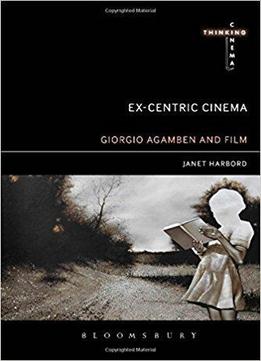 In the beginning, cinema was an encounter between humans, images and machine technology, revealing a stream of staccato gestures, micrographic worlds, and landscapes seen from above and below. In this sense, cinema's potency was its ability to bring other, non-human modes of being into view, to forge an encounter between multiple realities that nonetheless co-exist. Yet the story of cinema became (through its institutionalization) one in which the human swiftly assumed centrality through the literary crafting of story, character and the expression of interiority.

Ex-centric Cinema takes an archaeological approach to the study of cinema through the writings of philosopher Giorgio Agamben, arguing that whilst we have a century-long tradition of cinema, the possibility of what cinema may have become is not lost, but co-exists in the present as an unexcavated potential. The term given to this history is ex-centric cinema, describing a centre-less moving image culture where animals, children, ghosts and machines are privileged vectors, where film is always an incomplete project, and where audiences are a coming community of ephemeral connections and links. Discussing such filmmakers as Harun Farocki, the Lumiere Brothers, Guy Debord and Wong Kar-wai, Janet Harbord draws connections with Agamben to propose a radically different way of thinking about cinema.