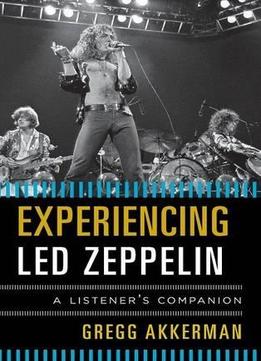 In 1980, Led Zeppelin formally disbanded following the death of drummer John Bonham. Yet over three decade, the music, the mystique, and the legacy of this legendary rock act lives on. Reissues of their music sell in the millions, while rumors of reunion tours continue to electrify fans across the globe. The various solo projects pursued by the three surviving members—Jimmy Page, Robert Plant, and John Paul Jones—will forever live the shadow of the blinding light they generated as Led Zeppelin.

In Experiencing Led Zeppelin: A Listener’s Companion, musician and writer Gregg Akkerman looks behind the curtain of “rock gods” sensationalism at this performing act's musical legacy through their studio and live recordings. Drawing on his many years as a rock musician and music scholar, Akkerman peeks under the hood to explain not just the when and the where of Led Zeppelin's music, but the why. Putting readers right there, in the times and places where the band was recording and performing its iconic numbers, Akkerman is the voice whispering in the ear of anyone interested in understanding how Led Zeppelin's music works.

Experiencing Led Zeppelin: A Listener’s Companion is for the die-hard Led Zeppelin fan and the first-timer just discovering the brilliance of this super band.