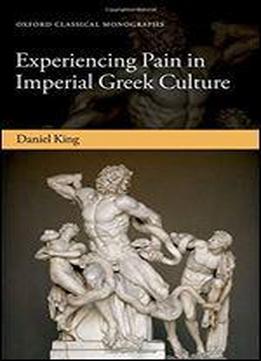 This volume investigates the history and nature of pain in Greek culture under the Roman Empire (50-250 CE). Traditional accounts of pain in this society have focused either on philosophical or medical theories of pain or on Christian notions of 'suffering' fascination with the pained body has often been assumed to be a characteristic of Christian society, rather than Imperial culture in general. This book employs tools from contemporary cultural and literary theory to examine the treatment of pain in a range of central cultural discourses from the first three centuries of the Empire, including medicine, religious writing, novelistic literature, and rhetorical ekphrasis. It argues instead that pain was approached from an holistic perspective: rather than treating pain as a narrowly defined physiological perception, it was conceived as a type of embodied experience in which ideas about the body's physiology, the representation and articulation of its perceptions, as well as the emotional and cognitive impact of pain were all important facets of what it meant to be in pain. By bringing this conception to light, scholars are able to redefine our understanding of the social and emotional fabric of Imperial society and help to reposition its relationship with the emergence of Christian society in late antiquity.