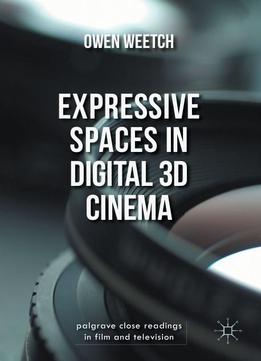 This book puts forward a more considered perspective on 3D, which is often seen as a distracting gimmick at odds with artful cinematic storytelling. Owen Weetch looks at how stereography brings added significance and expressivity to individual films that all showcase remarkable uses of the format.

Avatar, Gravity, The Hole, The Great Gatsby and Frozen all demonstrate that stereography is a rich and sophisticated process that has the potential to bring extra meaning to a film’s narrative and themes.

Through close reading of these five very different examples, Expressive Spaces in Digital 3D Cinema shows how being sensitive to stereographic manipulation can nuance and enrich the critical appreciation of stereoscopic films. It demonstrates that the expressive placement of characters and objects within 3D film worlds can construct meaning in ways that are unavailable to ‘flat’ cinema.