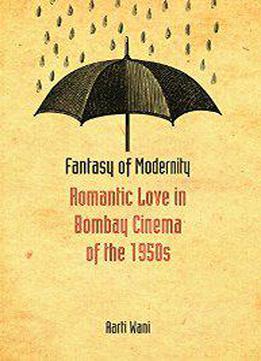 Romantic love overwhelms 1950s Bombay cinema. Love and romance is evident in the themes, lyrics and visual aesthetics of films of the period, as it is in the publicity and gossip surrounding films and film stars. Love in cinema becomes significant when social reality constrains its quotidian experience and expression. By bringing a spectacular imagination of love to centre stage, the 1950s cinema deflected anxieties of 'Indianness' even as the new aesthetic and affect of romance offered an alternative engagement with the contradictions of modernity. Fantasy of Modernity: Romantic Love in Bombay Cinema of the 1950s explores the films, the songs, the stars and the extra-cinematic discourse of the period to read love and romance as its most productive trope that mobilized a dynamic and contested public sphere. "This is a page-turner and a breath of fresh air. Written lucidly and clearly, well aware of contemporary debates in Indian and global film studies, which it both summarizes and takes forward, [this book] offers a new take on a much written area of film history, the popular Bombay cinema of the 1950s. While film studies have been preoccupied with the construction of the nation in cinema in this period, Wani suggests that this cinema was also simultaneously helping construct a modern sensibility premised on freedom, one built upon ideas of romance and erotic desire, not exactly congruent with the construction of a bourgeois and patriarchal nationhood. The insights she offers are so logical that one is struck at how we missed them so far." Jyotsna Kapur, Southern Illinois University "This is an original, rich and beautifully written account of Bombay cinema's preoccupation with romantic love, which draws on a wide range of archives, including little-known Marathi sources, as well as the author's encyclopaedic knowledge of the cinema of that era. This ambitious project brings genuinely new insights to our understandings of how romantic love - as the sign of the modern - was imagined and given shape in 1950s Bombay films, their songs and star texts. A pleasure to read." Rosie Thomas, University of Westminster "The originality of this delightfully written book lies in its focus on the relatively neglected 1950s as a pivotal moment in the evolution of Indian popular cinema, bridging the political event of Independence, and the technological innovation of colour cinematography. Identifying the theme of romantic love as the signature of modernity, the author cuts across conventional film genres to explore this conjunction in the three domains of 'urbanity'; of film songs; and through the phenomenon of stardom. It is rare to find a work that succeeds in stitching these separate discourses so elegantly together." Patricia Uberoi, Institute of Economic Growth