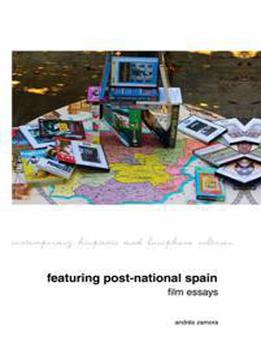 In the last quarter of the twentieth century a considerable number of Spanish films were involved in the task of essaying the nation, that is, of attempting to make it or make it over, of trying to reshape a national identity inexorably dictated by General Francisco Franco up to his death. The book explores four major issues in this regard: 1) the filmic negotiations of the borders of the nation, focusing particularly on the debated and controversial development of Basque cinema vis-a-vis the films produced in the rest of Spain; 2) the persistence of the old obsession with violence, thought of as an inescapable native trait, in a large amount of post-dictatorial films; 3) the newfound insatiable appetite for cinematic travelling, for going out and coming in through all possible variations of the road and travel movie genres; 4) and the vindication of the mother qua a benign emblem of the land and its people, of the nation. There is a narrative in Spanish cinema, taken as a collective discourse, which ties together these four cinematic topoi and proposes a nation whose specificity must be precisely its impurity-difference within as essence-a hybrid nation located in temporal and spatial rendezvous of past and present, tradition and novelty, centre and margin, inside and outside, on and beyond.