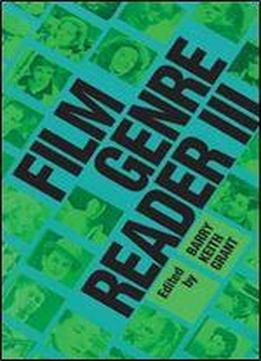 From reviews of the second edition: "The fascinating, well-chosen essays in this volume represent almost all of the recent (and often competing) trends in film scholarship and present significant revisions of earlier genre theories and analysis. Grant shows that the generic core, however constituted and established, is but one atom in a complex structure of film experience, response, and meaning." Choice "A terrific collection of essays on film theory and genre criticism. . . . With its numerous stills and an excellent bibliography, this work is ideal as an academic text or as an informative read for film buffs." Bloomsbury Review From reviews of the first edition: "The most pedagogically useful text on genre analysis because of the comprehensive nature of its scope." Film Quarterly "Ought to be considered by anyone teaching a course on theory and criticism of the American cinema." Communication Booknotes Since 1986, Film Genre Reader has been the standard reference and classroom text for the study of genre in film, with nearly 20,000 copies in print. Barry Keith Grant has again revised and updated the book to reflect the most recent developments in genre study. This third edition adds new essays on teen films, the question of genre hybridity, and neo-noir and genre in the era of globalization, along with an updated bibliography. The volume includes over thirty essays by some of film's most distinguished critics and scholars of popular film, including John G. Cawelti, David Desser, Thomas Elsaesser, Steve Neale, Thomas Schatz, Paul Schrader, Steve Neale, Vivian Sobchack, Janet Staiger, Linda Williams, and Robin Wood.