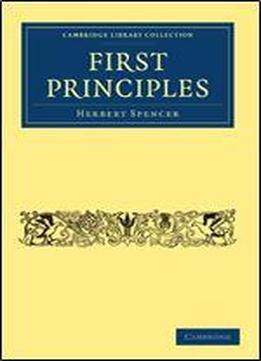 In 1862, the British philosopher Herbert Spencer (18201903) published this preamble to a planned series of publications on biology, psychology, sociology and morality. In it, he states that religion and science can be reconciled by their shared belief in an Absolute, and that ultimate principles can be discerned in all manifestations of the Absolute, particularly the general laws of nature being discovered by science. Spencer divides his text into two parts. Part I, 'The Unknowable', discusses early philosophical ideas that human knowledge is limited and cannot meaningfully conceive of God faith must be the bridge between human experience and ultimate truth. Spencer refutes this as he examines religion and science in detail. In Part II, 'Laws of the Knowable', Spencer argues that religion and science can be reconciled in the underlying unity from which the visible complexity of the universe has evolved.