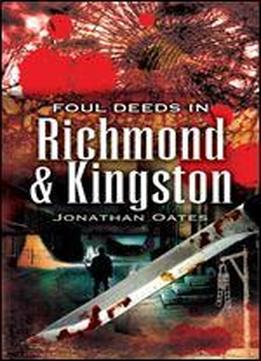 You may think Richmond, Kingston and the neighbouring districts are prosperous, safe and law-abiding in comparison to the hazardous, crime-prone centre of London, but you would be mistaken. For, as Jonathan Oates shows in this gripping book, appalling crimes have shocked the local community and left their mark on the history of the area over the last two centuries. Among the sensational criminal cases he reconstructs in chilling, forensic detail are the murder of the French count and countess who fled the reign of terror in revolutionary France only to become the victims of their own servant, the bigamist suspected of poisoning, the female servant who was hanged for chopping up her mistress, the poverty-stricken elderly couple who swallowed belladonna in a suicide pact, the jobless accountant who shot his three children and committed suicide, and the killing of two teenage girls who were assaulted, then stabbed, then thrown in the Thames. As he takes the reader through these stories of malice, perversion and despair, Jonathan Oates reveals the dark, sometimes lethal side of the history of Richmond and Kingston.