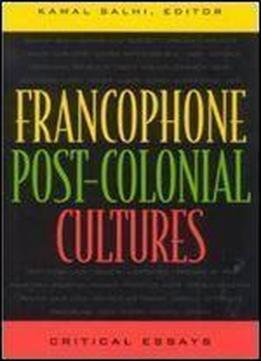 The recent rise of Francophone studies within French studies has created the need for a one-volume exploration of the range of expression in the French language following the colonial period. Francophone Post-Colonial Cultures collects discussions of literary texts and cultural identity from Europe, North Africa, the Caribbean, and South Asia regions of the world that seem to have only the French language in common. Despite enormous differences among all the countries where French is spoken, Francophone literatures tend to deal with a similar spread of issues. This volume positions the study of the Francophone world and its cultures as a comparative project, in which post-colonial Francophone cultures and the specific alterity of these cultures emerge as inextricable from and essential to an understanding of modern France. Organized by region, boasting an international roster of contributors, and including summaries of selected creative and critical works and a guide to selected terms and figures, Francophone Post-Colonial Cultures is an ideal resource for scholars of French literature and advanced students looking to read beyond the French literary canon.