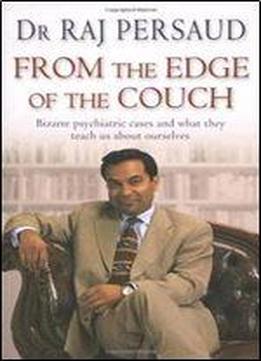 From The Edge Of The Couch : Bizarre Psychiatric Cases And What They Teach Us About Ourselves
by Raj Persaud / 2018 / English / EPUB

You may think that vampires and werewolves were merely the stuff of bad Hollywood films and mysterious legends, but as Consultant Psychiatrist Dr Raj Persaud reveals, there are real people out there who believe they are werewolves and vampires. As a result, they behave in ways beyond our most disturbing dreams and the wildest fantasies of imaginative film producers. In the tradition of Oliver Sacks' bestselling book, THE MAN WHO MISTOOK HIS WIFE FOR A HAT, Dr Persaud uses authentic case studies to explain current thinking on brain function and emotional disorders - such as that of the man who could only get his sexual kicks by being crushed in garbage trucks, the film fan who embedded dozens of needles into his body in order to become a robot, and those who take dieting to the ultimate limit by obsessively giving blood or eating nothing but toilet paper. Through these and other conditions, such as Alien Hand Syndrome - where suffers believe that one of their own hands is out to harm them - Multiple Personality Disorder, Erotomania and the cases of some women in Turkey whose tears are actually filled with blood, Dr Persaud also suggests that we may not have as much free will and control over our bodies as we would like to believe and provides startling new evidence that these conditions might be more common than sceptical psychiatrists realize.