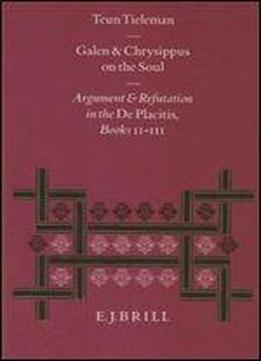 Galen And Chrysippus On The Soul: Argument And Refutation In The De Placitis Books Ii-iii
by Teun Tieleman / 2018 / English / PDF

This volume deals with books II and III of the "On the Doctrines of Hippocrates and Plato" by the medical scientist and philosopher Galen of Pergamum (129-c. 210 CE ). In these books Galen offers an extensive critique of Stoic psychology, quoting a large number of passages from the otherwise lost treatise "On the Soul" by the great Stoic philosopher Chrysippus. This first full-scale study of Chrysippus' mode of argumentation considers the fragments both in their Galenic context and in relation to Stoicism in general. A separate discussion is devoted to Galen's aims and methods and the traditions he is indebted to. Though designed as a foil for the treatment of Chrysippus, it can also be read by those ted in Galen's methodology for its own sake.