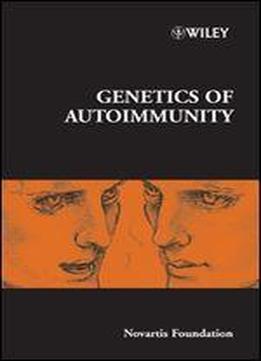 Immunological diseases result from the combined effects of environmental triggers and inherited susceptibility genes. Studies of human autoimmune diseases show that patients with organ-specific autoimmunity have activated, autoreactive T cells specific for the target tissue. However, conventional immunological studies have not identified the next level of pathogenesis of spontaneous autoimmune diseases. There has consequently been great interest in identifying genes conferring susceptibility to autoimmune diseases. This book focuses on genes that may be associated with autoimmunity, how they can be identified, and how the functions of the gene products can be elucidated. Progress in the Human Genome Project has reached the point where the tools required for whole genome screens are likely to be developed soon. International efforts to catalogue human genetic variation have provided a huge genetic marker source. The genome-wide map of single nucleotide polymorphisms (SNPs) has grown from just 4000 in 1999 to more than 3.5 million in early 2005. This provides a map of genetic variants at an average density of one every 1.5 kb in the human genome. Detailed analysis of the way in which variants are inherited is concentrated on certain hotspots between which SNP alleles on the same chromosome (so-called haplotypes) tend to remain together and be inherited as a unit. In some populations arising from small founding groups, there are usually only a few haplotypes seen within each of the DNA blocks defined by recombinational hotspots (typically 30-60 kb in size). This reduced haplotype diversity means that only a small proportion of the SNPs in each block need to be tested for association. A large amount of data on disease-associated chromosomal loci has been accumulated from inbred mice. One of the interesting messages to emerge is that some susceptibility loci are common to many diseases, whereas others are relatively disease-specific. Moving from chromosomal loci to defined genes is proving to be a major challenge. Finally, many individual genes that influence the choice between tolerance and activation, and whose expression is altered in tolerant cells, have now been identified, and more continue to be discovered. These may provide the foundation for more guided or rational searches for disease-associated genes in various diseases. This book describes the key problems and challenges facing those working on the genetics of autoimmunity and features unique in-depth discussion by experts from around the world. It will prove fascinating reading to anyone involved in the study of autoimmune diseases.