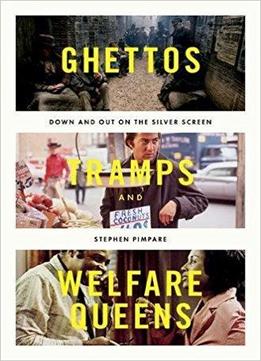 Ghettos, Tramps, And Welfare Queens: Down And Out On The Silver Screen
by Stephen Pimpare / 2017 / English / PDF

Ghettoes, Tramps, and Welfare Queens: Down & Out on the Silver Screen explores how American movies have portrayed poor and homeless people from the silent era to today. It provides a novel kind of guide to social policy, exploring how ideas about poor and homeless people have been reflected in popular culture and evaluating those images against the historical and contemporary reality. Richly illustrated and examining nearly 300 American-made films released between 1902 and 2015, Ghettoes, Tramps, and Welfare Queens finds and describes representations of poor and homeless people and the places they have inhabited throughout the century-long history of U.S. cinema. It moves beyond the merely descriptive to deliberate whether cinematic representations of homelessness and poverty changed over time, and if there are patterns to be discerned. Ultimately, the text offers a preliminary response to a handful of harder questions about causation and consequence: Why are these portrayals as they are? Where do they come from? Are they a reflection of American attitudes and policies toward marginalized populations, or do they help create them? What does this all mean for politics and policymaking?

Of interest to movie buffs and film scholars, cultural critics and historians, policy analysts, and those curious to know more about homelessness and American poverty, Ghettoes, Tramps, and Welfare Queens is a unique window into American politics, history, policy, and culture ― it is an entertaining and enlightening journey.