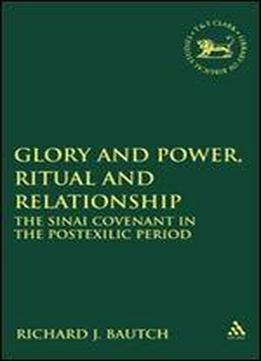 Glory And Power, Ritual And Relationship: The Sinai Covenant In The Postexilic Period (the Library Of Hebrew Bible/old Testament Studies)
by Richard J. Bautch / 2009 / English / PDF

The book's point of departure is the return from the Exile, which is presented as an opportunity for Jews, primarly those in Judah, to interpret anew the relationship between God and Israel. The relationship had traditionally been thought of as a covenant, and central to the book's thesis is that post-exilic writers used a paradigm that was essentially that of the pre-exilic Mosiac covenant, i.e. a pact between God and humanity conditioned by the latter's observance of the law. The first part of the book describes the process whereby the Mosaic covenant was renovated and its content brought up to date. In this discussion, familiar topoi of Second Temple Judaism such as penitential prayer, creation theology, and kinship ethos are shown to be integral to a contemporary concept of creation. The second part of the book explores a paradox. On the one hand, the fact that the Mosaic covenant was articulated in the discourse of kinship marked it with an insularity that in turn made this covenant attractive to sectarian groups. Here, evidence is adduced largely from the Dead Sea Scrolls. On the other hand, as the dominant paradigm the Mosaic covenant had ascribed to it a high level of normativity, as seen in the work of tradents such as the Priestly editors and the author of Jubilees. Ultimately, the Mosaic covenant was invoked at the center and the periphery as both a normative theological concept and a cipher to sectarian self-identity. The book concludes that by the end of the Second Temple period, although the Mosiac covenant was normative in terms of a covenantal nomism that was incumbent upon the Jews, the covenant's sectarian tendenz made its precepts non-binding and optional.