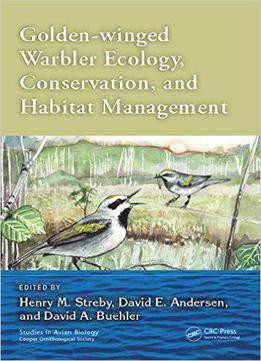 Golden-winged Warblers (Vermivora chrysoptera) are migratory songbirds that breed in temperate North America, primarily in the Great Lakes region with remnant populations throughout the Appalachian Mountains, and winter in Central and northern South America. Their breeding range has contracted dramatically in the Appalachian Mountains and many populations have dramatically declined, likely due to habitat loss, competition and interbreeding with Blue-winged Warblers (Vermivora pinus), andglobal climate change.. As a result of population declines in much of the eastern portion of their breeding range, Golden-winged Warblers are listed as endangered or threatened in 10 U.S. states and in Canada and have been petitioned for protection under the U.S. Endangered Species ActThis book compiles extensive, current research on Golden-winged Warblers and summarizes what is known and identifies many remaining unknowns, providing a wealth of peer-reviewed science on which future research and listing decisions can be based.