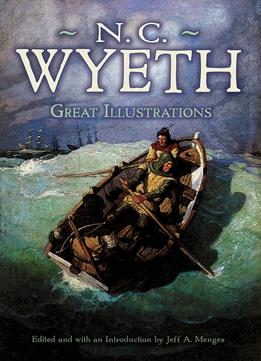 Before Andrew and Jamie, there was N. C. Wyeth. The star student of Howard Pyle's Brandywine School, Newell Convers Wyeth (1882–1945) created more than 3,000 illustrations in the course of his career. This original full-color collection focuses on his most popular illustrations, featuring early works that date from 1910-30. More than 100 iconic images include scenes from The Last of the Mohicans, The Mysterious Stranger, Robin Hood, Robinson Crusoe, Rip Van Winkle, The Boy's King Arthur, and other books. Wyeth's fame and greatest commercial success derived from his work for Scribners' Illustrated Classics. Starting with the 1911 edition of Treasure Island, the artist provided images for more than 25 volumes in the series. Many of those illustrations appear here, in a treasury of stirring, dramatic visions that captured the imaginations of the storybook readers of a century ago and continue to speak to modern audiences.