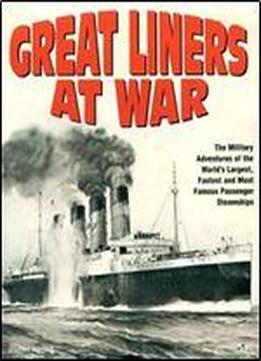 During the past century, some of the most magnificent passenger ships ever built were commandeered by the military and converted to floating hospitals, armed merchant cruisers, dummy battleships, or troop transports. Several of the world’s largest shipwrecks occurred when liners were sunk in wartime, from the Titanic’s sister ship Britannic—sunk in 1916 when she hit a mine—to Canadian Pacific’s Empress of Britain, which was attacked and sunk by a U-boat in 1940. Passenger ships played a huge role in World War II in particular it is estimated that the huge troop-carrying capacity of the Queen Mary and Queen Elizabeth shortened the war by at least a year. This is a captivating look at the civilian-made liners that served in conflicts ranging from World War I up through more recent conflicts such as the Falkland Islands and the enormous contributions they have made to the armed services.