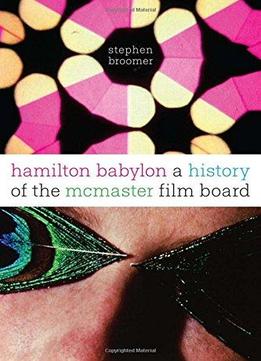 Hamilton Babylon: A History Of The Mcmaster Film Board
by Stephen Broomer / 2016 / English / PDF

Founded in 1966 at McMaster University by avant-garde filmmaker John Hofsess and future frat-comedy innovator Ivan Reitman, the McMaster Film Board was a milestone in the development of Canada’s commercial and experimental film communities. McMaster’s student film society quickly became the site of art filmmaking and an incubator for some of the country’s most famous commercial talent – as the well as the birthplace of the first Canadian film to lead to obscenity charges, Hofsess’s Columbus of Sex.

In Hamilton Babylon, Stephen Broomer traces the history of the MFB from its birth as an organization for producing and exhibiting avant-garde films, through its transformation into a commercial-industrial enterprise, and into its final decline as a show business management style suppressed many of its voices. The first book to highlight the work of Hofsess, an innovative filmmaker whose critical role in the MFB has been almost entirely eclipsed by Reitman’s legend, Hamilton Babylon is a fascinating study of the tension between art and business in the growth of the Canadian film industry.