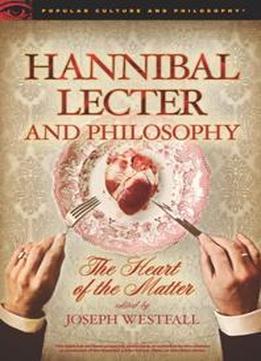 Hannibal Lecter And Philosophy : The Heart Of The Matter
2016 / English / PDF

Hannibal Lecter, the subject of best-selling novels, movies, and the acclaimed TV series Hannibal, is one of pop culture's most compelling characters. In Hannibal Lecter and Philosophy, 16 philosophers come at Hannibal the way he comes at his victims — from unexpected angles and with plenty of surprises.

What does the relationship between Hannibal and those who know him — particularly FBI investigator Will Graham — tell us about the nature of friendship? Does Hannibal confer benefits on society by eliminating people who don’t live up to his high aesthetic standards? Can upsetting experiences in early childhood turn you into a serial killer? Why are we enthralled by someone who exercises god-like control over situations and people? Does it make any difference morally that a killer eats his victims? Can a murder be a work of art?

Several chapters look at the mind of this proud and accomplished killer, psychiatrist, and gourmet cook. Is he a sociopath or a psychopath, or are these the same? Is he lacking in empathy? Does his moral blindness give him compensating abilities, the way literally blind people gain heightened senses? Does it harm us that we are drawn into Hannibal’s world by identifying with him?