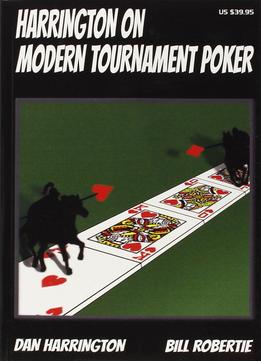 Over the last ten years, the enormous growth of interest in poker and poker tournaments has led to an intense focus on the theory of tournament poker. The result was a re-examination of old ideas and the introduction of many new ones. The fundamentals of no-limit hold em did not change, but the game was revealed to have more depth than many older players could have anticipated. As a result, no-limit hold em tournament play has evolved into a newer, tougher, faster game, and good players have had to evolve to keep up. In Harrington on Modern Tournament Poker, Dan Harrington takes a fresh look at the world of no-limit hold em tournaments. He explains how the game is currently played, and what you ll have to do to be a successful tournament player in 2013 and beyond. The topics examined include how to play different hand types preflop, when to 3-bet and 4-bet, how to analyze the flop, turn, and river, and how to size your bets. Dan also explains how to adjust your strategy as your stack size grows and shrinks, and how to handle the new breed of super-aggressive players that you ll meet at the table (and, if you want, how to play that way yourself). Dan Harrington won the Gold Bracelet and the World Champion Title at the Main Event of the 1995 World Series of Poker. And he was the only player in recent history to make the final table in back-to-back years 2003 and 2004 considered by cognoscenti to be the greatest accomplishment in WSOP history.