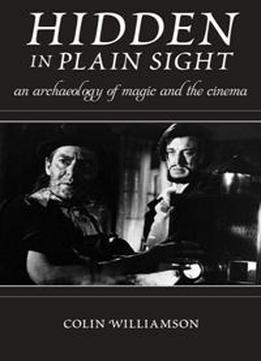 Hidden In Plain Sight : An Archaeology Of Magic And The Cinema
2015 / English / PDF

What does it mean to describe cinematic effects as “movie magic,” to compare filmmakers to magicians, or to say that the cinema is all a “trick”? The heyday of stage illusionism was over a century ago, so why do such performances still serve as a key reference point for understanding filmmaking, especially now that so much of the cinema rests on the use of computers?

To answer these questions, Colin Williamson situates film within a long tradition of magical practices that combine art and science, involve deception and discovery, and evoke two forms of wonder—both awe at the illusion displayed and curiosity about how it was performed. He thus considers how, even as they mystify audiences, cinematic illusions also inspire them to learn more about the technologies and techniques behind moving images. Tracing the overlaps between the worlds of magic and filmmaking, Hidden in Plain Sight examines how professional illusionists and their tricks have been represented onscreen, while also considering stage magicians who have stepped behind the camera, from Georges Melies to Ricky Jay.

Williamson offers an insightful, wide-ranging investigation of how the cinema has functioned as a “device of wonder” for more than a century, while also exploring how several key filmmakers, from Orson Welles to Christopher Nolan and Martin Scorsese, employ the rhetoric of magic. Examining pre-cinematic visual culture, animation, nonfiction film, and the digital trickery of today's CGI spectacles, Hidden in Plain Sight provides an eye-opening look at the powerful ways that magic has shaped our modes of perception and our experiences of the cinema.