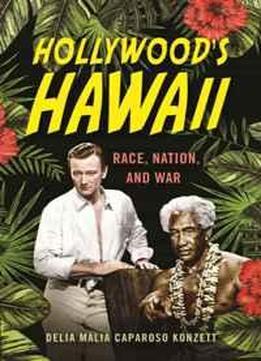 Whether presented as exotic fantasy, a strategic location during World War II, or a site combining postwar leisure with military culture, Hawaii and the South Pacific figure prominently in the U.S. national imagination. Hollywood's Hawaii is the first full-length study of the film industry's intense engagement with the Pacific region from 1898 to the present.

Delia Malia Caparoso Konzett highlights films that mirror the cultural and political climate of the country over more than a century–from the era of U.S. imperialism on through Jim Crow racial segregation, the attack on Pearl Harbor and WWII, the civil rights movement, the contemporary articulation of consumer and leisure culture, as well as the buildup of the modern military industrial complex. Focusing on important cultural questions pertaining to race, nationhood, and war, Konzett offers a unique view of Hollywood film history produced about the national periphery for mainland U.S. audiences. Hollywood's Hawaii presents a history of cinema that examines Hawaii and the Pacific and its representations in film in the context of colonialism, war, Orientalism, occupation, military buildup, and entertainment.