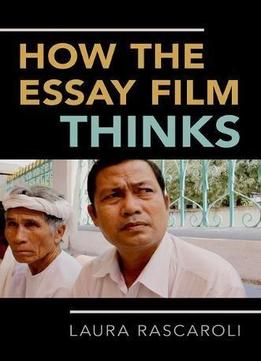 How The Essay Film Thinks
by Laura Rascaroli / 2017 / English / PDF

This book offers a novel understanding of the epistemological strategies that are mobilized by the essay film, and of where and how such strategies operate. Against the backdrop of Adorno's discussion of the essay form's anachronistic, anti-systematic and disjunctive mode of resistance, and capitalizing on the centrality of the interstice in Deleuze's understanding of the cinema as image of thought, the book discusses the essay film as future philosophy-as a contrarian, political cinema whose argumentation engages with us in a space beyond the verbal. A diverse range of case studies discloses how the essay film can be a medium of thought on the basis of its dialectic use of audiovisual interstitiality. The book shows how the essay film's disjunctive method comes to be realized at the level of medium, montage, genre, temporality, sound, narration, and framing-all of these emerging as interstitial spaces of intelligence that illustrate how essayistic meaning can be sustained, often in contexts of political, historical or cultural extremity. The essayistic urge is not to be identified with a fixed generic form, but is rather situated within processes of filmic thinking that thrive in gaps.