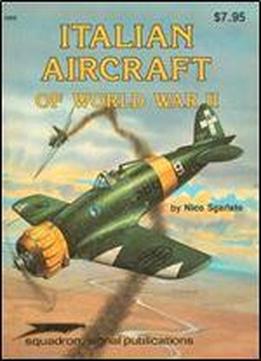 "Italian Aircraft of World War II" by Nico Sgarlato is one of the few published books dedicated solely to the topic of Regia Aeronautica (Royal Italian Air Force) aircraft during the Second World War. Therefore it is worth taking a look at. The book covers most of the major Italian aircraft of that conflict, ranging from fighters such as the Fiat CR 42, Fiat G 50, and Macchi MC 202, to bombers such as the Savoia Marchetti SM 79 and Piaggio P 108, to ground attack aircraft such as the Breda Ba 65, to reconnaissance aircraft such as the Fiat RS 14 and Caproni Ca 313/314. The book's biggest strength is its excellent illustrations, including a wealth of photographs, three-view line drawings, cutaway illustrations, and color plates for most of the aircraft. It also features detailed technical data for each aircraft discussed. Its biggest weakness is its text, which other than a brief introduction consists mainly of photo captions and thus does not capture the full technical development or operational history of any of the aircraft. Overall this book is a good start to understanding the Italian aircraft of WW2, but for the complete story one must look elsewhere.