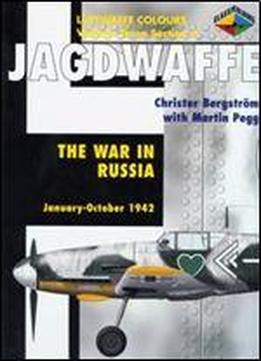 Defeat in North Africa and the disastrous loss of Sixth Army at Stalingrad were undoubtedly huge blows to the Wehrmacht, but the most critical battle of 1943 was fought at Kursk. In the spring of 1943, the Russian front bulged into the German lines between Kharkov and Orel. Here, in July, German forces tried to regain the initiative on the Russian Front by a planned attack to pinch off this salient and straighten the front, but forewarned, the Soviets absorbed the German thrust and counterattack. The climax to this titanic clash of forces was the battle at Kursk, scene of the largest tank battle in history, where German land forces were defeated and forced to retreat in the face of an unstoppable Soviet counterattack. Is it against this background that in this 96-page tile, Christer Bergstrom, an acknowledged expert on the air-war in Russia, describes the activities of the Luftwaffe's fighter-force in its battles over the Russian Front.