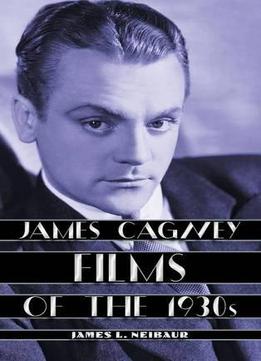 One of the biggest stars of the golden age of Hollywood, James Cagney appeared in more than sixty films throughout his career. In addition to starring in the classics White Heat, Mister Roberts, and One, Two, Three, Cagney received the Academy Award for his performance as George M. Cohan in Yankee Doodle Dandy. From his debut in Sinner’s Holiday to one of his many gangster portrayals in The Roaring Twenties, the actor appeared in more than thirty films of the 1930s. Though he started out in supporting roles, Cagney quickly became a leading man and by the end of the decade, he was a box-office star. In James Cagney Films of the 1930s, James L. Neibaur reviews the first decade of the great actor’s work. A film-by-film look at Cagney’s movies during this pivotal period, this book traces the actor’s transition from a song-and-dance man on stage to a tough guy on screen. Although Cagney occasionally was able to deviate from studio typecasting—in such films as Footlight Parade and A Midsummer Night’s Dream—his most notable roles were in gangster dramas like The Public Enemy and Angels with Dirty Faces. Throughout this book, Neibaur provides readers with plot summaries, production details, and critical and commercial reception of each film. For fans of the actor’s work, James Cagney Films of the 1930s is an invaluable resource that will also appeal to anyone interested in movie-making during one of Hollywood’s greatest eras.