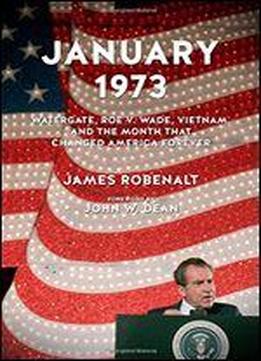 American politics changed forever in January 1973. In the span of thirty-one days, the Watergate burglars went on trial, the Nixon administration negotiated an end to the Vietnam War, the Supreme Court issued its decision in Roe v. Wade, Lyndon Johnson died in Texas (and Harry Truman passed away just a month earlier), and Richard Nixon was sworn in for his second term. The events had unlikely links and each worked along with the others to create a time of immense transformation. Roe in particular pushed political opponents to the outer reaches of each party, making compromise something that has become more and more difficult in our system of checks and balances. Using newly released Nixon tapes, author and historian James Robenalt provides readers a fly-on-the-Oval-Office-wall look at events both fascinating and terrifying that transpired in the White House during this monumental month. He also delves into the judge's chambers and courtroom drama during the Watergate break-in trial, and the inner sanctum of the US Supreme Court as it hashed out its decision in Roe v. Wade. Though the events took place more than forty years ago, they're key to understanding today's political paralysis.