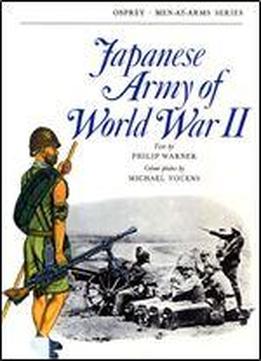 In 1941 the Allied forces in the Pacific were devastatingly unprepared for the onslaught of the Japanese Army, which by this time had been fighting for ten years on the Manchurian front. The Allies paid dearly for their lack of planning and found themselves defeated time and time again as the seasoned Japanese forces swept through the Pacific colonies. This book examines the Japanese concept of war and describes the organization, tactics and weaponry of the Japanese Army from their triumphant invasions of 1941-42 until their ultimate defeat in 1945. Numerous illustrations and colour plates depict the weapons and uniforms of the Japanese troops of World War II in vivid detail.