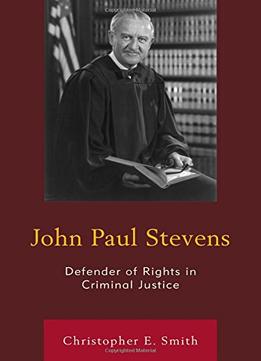 This book examines the judicial opinions and criminal justice policy impact of Justice John Paul Stevens, the U.S. Supreme Court’s most prolific opinion author during his 35-year career on the nation’s highest court. Although Justice Stevens, a Republican appointee of President Gerald Ford, had a professional reputation as a corporate antitrust law attorney, he immediately asserted himself as the Court’s foremost advocate of prisoners’ rights and Miranda rights when he arrived at the Court in 1975. In examining Justice Stevens’s opinions on these topics as well as others, including capital punishment and right to counsel, the chapters of the book connect his prior experiences with the development of his views on rights in criminal justice. In particular, the book examines his relevant experiences as a law clerk to Justice Wiley Rutledge in the Supreme Court’s 1947 term, a volunteer attorney handling criminal cases in Illinois, and a judge on the U.S. court of appeals to explore how these experiences shaped his understanding of the importance of rights in criminal justice. For many issues, such as those affecting imprisoned offenders, Justice Stevens was a strong defender of rights throughout his career. For other issues, such as capital punishment, there is evidence that he became increasingly protective of rights over the course of his Supreme Court career. The book also examines how Justice Stevens became increasingly important as a leading dissenter against the diminution of rights in criminal justice as the Supreme Court’s composition became increasingly conservative in the 1980s and thereafter. Because of the nature and complexity of Justice Stevens’s numerous and varied opinions over the course of his lengthy career, scholars find it difficult to characterize his judicial philosophy and impact with simple labels. Yet in the realm of criminal justice, close examination of his work reveals that he earned a reputation and an enduring legacy as an exceptionally important defender of constitutional rights.