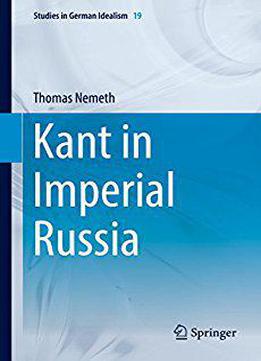 This book presents a comprehensive study of the influence of Immanuel Kant’s Critical Philosophy in the Russian Empire, spanning the period from the late 19th century to the Bolshevik Revolution. It systematically details the reception bestowed on Kant’s ideas during his lifetime and up to and through the era of the First World War. The book traces the tensions arising in the early 19th century between the imported German scholars, who were often bristling with the latest philosophical developments in their homeland, and the more conservative Russian professors and administrators. The book goes on to examine the frequently neglected criticism of Kant in the theological institutions throughout the Russian Empire as well as the last remaining, though virtually unknown, embers of Kantianism during the reign of Nicholas I. With the political activities of many young radicals during the subsequent decades having been amply studied, this book focuses on their largely ignored attempts to grapple with Kant’s transcendental idealism. It also presents a complete account of the resurgence of interest in Kant in the last two decades of that century, and the growing attempts to graft a transcendental idealism onto popular social and political movements. The book draws attention to the young and budding Russian neo-Kantian movement that mirrored developments in Germany before being overtaken by political events.