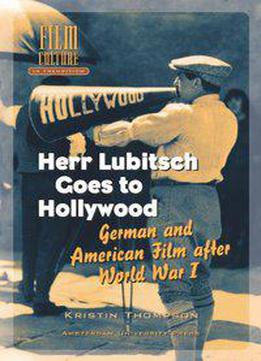 Ernst Lubitsch, the German filmmaker who left Berlin for Hollywood in the 1920s, is best remembered today for the famous "Lubitsch touch" in such masterpieces as Ninotchka, which featured Greta Garbo's first-ever screen smile, and Heaven Can Wait. Kristin Thompson's study analyzes Lubitsch's earlier silent films of 1918 to 1927 in order to trace the mutual influences between the classical Hollywood film style as it had evolved in the 1910s and the German film industry of the same period, which had emerged from World War I second in strength only to Hollywood. During World War I, American firms supplied theaters around the world as French and Italian films had become scarce. Ironically, the war strengthened German filmmaking due to a ban on imports that lasted until 1921. During that period of isolation, Lubitsch became the finest proponent of German filmmaking and once Hollywood films appeared in Germany again Lubitsch was quick to absorb their stylistic traits as well. He soon became the unique master of both styles as the golden ages of the American and German cinema were beginning. This innovative study utilizes Lubitsch's silent films as a means to compare two great national cinemas at a vital formative period in cinema history.