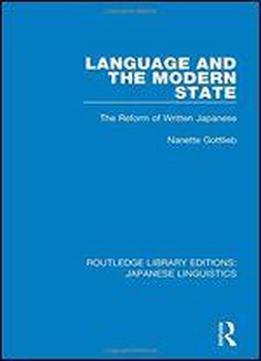 Language And The Modern State: The Reform Of Written Japanese
by Nanette Gottlieb / 2018 / English / PDF

Originally published in 1991, this book examines the process whereby a modern colloquial style of written Japanese was developed in the context of the overall modernization of Japan. The book examines the process whereby this strategic simplification took place in Japan, beginning with a discussion of the background to the problem and the reasons why change was indicated. The history, characteristics and spheres of the four major styles found in documents of the modern period are examined, as are initial moves towards language reform in the fields of education and printed media. Separate illustrations in Japanese script are provided to give an idea of the changing visual complexity of texts in-text references, however, are romanized except where the use of characters is essential. Wherever possible, English sources are cited in addition to Japanese where published translations are available, these are cited in order to enable non-speakers of Japanese to follow up references if they so desire.