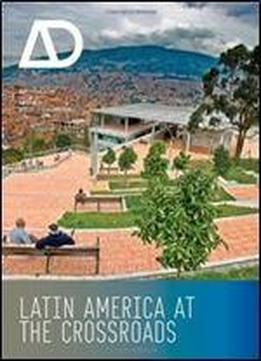 Latin America At The Crossroads
by Mariana Leguia / 2017 / English / PDF

The announcement of Rio de Janeiro as the 2016 Olympic host city has placed Latin America on the world's stage. Latin America has not been the centre of international architectural attention and pilgrimage since the mid 20th century when economic growth triggered the development of Modernist urban design and architecture on an epic scale. Since then the centralised, utopian planned model has broken down. Mass migrations from the countryside and erection of informal settlements have left cities socially and spatially divided. Within this context and in the mist of globalization Latin America is set to go though major change once again. In recent decades, resourceful governments and practices have developed innovative approaches to urban design and development, less to do with the utopian and totalitarian schemes and more to do with "urban acupuncture", working within rather than denying the framework of informality to stitch together disparate parts of the city. This title of AD will explore the current urban issues faced by Latin American cities and the response of alternative local practitioners at different scales. Large-scale urban case studies, such as the revitalisation of Bogot and Medellin, will be featured alongside architectural practices, research-based organisations and university studios working at a grass-roots level. Contributors include: Saskia Sassen, Hernando de Soto, Ricky Burdett and Bogot ex-mayor Enrique Pealosa. Featured architects: Teddy Cruz, UTT-Urban Think-Tank, Jorge Jauregui, Alejandro Echeverri, MMBB and Alejandro Aravena.