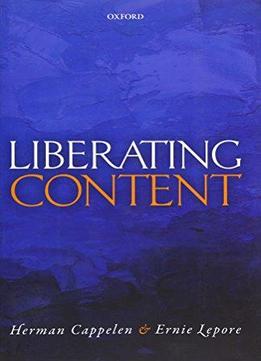 This volume brings together two series of papers: one began with Herman Cappelen and Ernie Lepore's 1997 paper 'On an Alleged Connection Between the Theory of Meaning and Indirect Speech'. The other series started with their 1997 paper 'Varieties of Quotation'. The central theme throughout is that only when communicative content is liberated from semantic content will we make progress in understanding language, communication, contexts, and their interconnection. These are the papers in which Cappelen and Lepore introduced speech act pluralism and semantic minimalism, and they provide the foundation for one of the most powerful attacks on contextualism in contemporary philosophy.