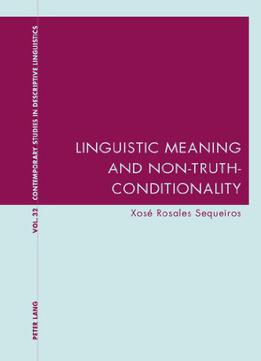 This book offers a new perspective on current semantic theory by analysing key aspects of linguistic meaning and non-truth-conditional semantics. It applies non-truth-conditional semantics to various areas of language and critically considers earlier approaches to the study of semantic meaning, such as truth-conditional semantics, Speech Act theory and Gricean conventional implicatures. The author argues that those earlier approaches to linguistic semantics do not stand up to close scrutiny and are subject to a number of counterexamples, indicating that they are insufficient for a comprehensive and unified account of linguistic semantics. An alternative framework is then presented based on recent developments in the field, demonstrating that it is possible to provide a unified account of linguistic semantics by making two fundamental distinctions between (a) conceptual and procedural meaning and (b) explicit and implicit communication. These two distinctions, combined with the various levels of representation available in linguistic communication, allow researchers to capture the variety of linguistic meaning encountered in natural language. The study includes a discussion of a number of areas within linguistic semantics, including sentence adverbials, parentheticals, discourse/pragmatic connectives, discourse particles, interjections and mood indicators.