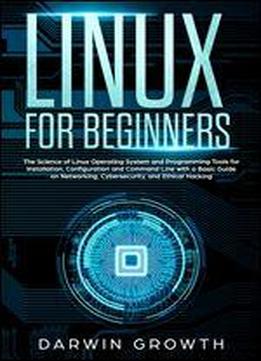 Linux For Beginners: The Science Of Linux Operating System And Programming Tools For Installation, Configuration And Command Line With A Basic Guide On Networking, Cybersecurity, And Ethical Hacking
by Darwin Growth / 2019 / English / PDF

Linux is a free and freely distributed operating system inspired by the UNIX system, written by Linus Torvalds with the help of thousands of programmers. UNIX is an operating system developed in 1991, one of whose greatest advantages is that it is easily portable to different types of computers, so there are UNIX versions for almost all types of computers, from PC and Mac to workstations and supercomputers. Unlike other operating systems, such as MacOS (Apple operating system), UNIX is not intended to be easy to use, but to be extremely flexible. It is generally as easy to use as other operating systems, although great efforts are being made to facilitate its use. This operating system is an option to be taken into account by those users who are dedicated to work through networks, surf the internet, or devote to programming. In this book you will find a precise starting guide to learn all the basic principles on Linux and a step-by-step process that will introduce you to this incredible operating system.