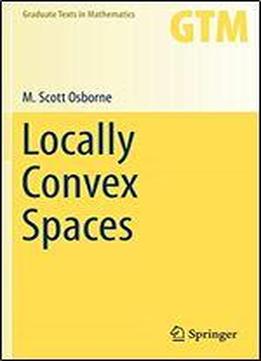 For most practicing analysts who use functional analysis, the restriction to Banach spaces seen in most real analysis graduate texts is not enough for their research. This graduate text, while focusing on locally convex topological vector spaces, is intended to cover most of the general theory needed for application to other areas of analysis. Normed vector spaces, Banach spaces, and Hilbert spaces are all examples of classes of locally convex spaces, which is why this is an important topic in functional analysis. While this graduate text focuses on what is needed for applications, it also shows the beauty of the subject and motivates the reader with exercises of varying difficulty. Key topics covered include point set topology, topological vector spaces, the HahnBanach theorem, seminorms and Frchet spaces, uniform boundedness, and dual spaces. The prerequisite for this text is the Banach space theory typically taught in a beginning graduate real analysis course.