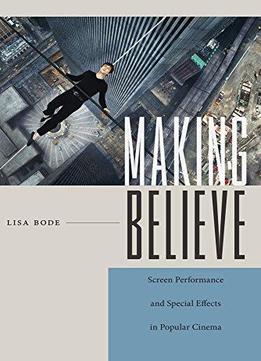 In the past twenty years, we have seen the rise of digital effects cinema in which the human performer is entangled with animation, collaged with other performers, or inserted into perilous or fantastic situations and scenery. Making Believe sheds new light on these developments by historicizing screen performance within the context of visual and special effects cinema and technological change in Hollywood filmmaking, through the silent, early sound, and current digital eras.

Making Believe incorporates North American film reviews and editorials, actor and crew interviews, trade and fan magazine commentary, actor training manuals, and film production publicity materials to discuss the shifts in screen acting practice and philosophy around transfiguring makeup, doubles, motion capture, and acting to absent places or characters. Along the way it considers how performers and visual and special effects crew work together, and struggle with the industry, critics, and each other to define the aesthetic value of their work, in an industrial system of technological reproduction. Bode opens our eyes to the performing illusions we love and the tensions we experience in wanting to believe in spite of our knowledge that it is all make believe in the end.