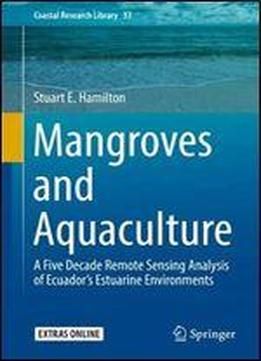 This book uses five decades of map data, air photos, and medium to high-resolution satellite imagery to track the expansions of aquaculture and the loss of both estuarine and mangrove land covers in Ecuador. The results are staggering. In some regions, Ecuador has lost almost 50% of its estuarine space and approximately 80% of its mangrove forest. The current estuarine land cover bears no resemblance to the historic estuarine land cover. The analysis is complete from 1968 to 2014. The analysis covers all the major estuaries of mainland Ecuador. The research expands beyond purely land cover into the land use of the estuaries and the implications of the land cover transitions. The author lived in Ecuador's estuarine environments for almost two years studying this area. During this time he conducted mapping workshops with local residents, conducted 100 interviews with local actors, conducted six group discussions with fisherfolk syndicates, conducted eight presentations, worked on a shrimp farm. He was employed by the Ministry of the Environment on a Prometeo fellowship for one-year researching estuarine health and worked on mangrove replanting projects in the estuaries. In addition to the remote sensing data, the author provides a contextual framework to the analysis. It is not just hard numbers that are presented, but a remote sensing analysis tied to local actors that tell a coherent almost 50 -year estuarine story at the national, provincial, and local scales The book is intended for researchers, academics, graduate students, NGOs, and government actors including those who work in development, environment, and policy implementation. It is suitable supplemental reading for students in courses related to the coastal zone, land use change, and remote sensing. The electronically supplementary material includes all the related data to underpin the analysis as well as all the resulting GIS files.