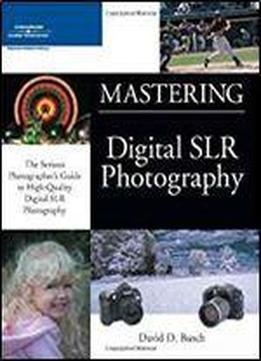 Some amazing things have happened to the digital photography world in the past year. Sales of digital cameras have exceeded sales of film cameras of all types for the first time ever. Serious photographers spent years on the wrong side of a tantalizing barrier that separated them from their dream DSLR cameras that were priced at USD1500 to USD5000 or more. Now, every serious amateur, photo hobbyist, and part-time professional can easily afford a fully-featured interchangeable lens digital camera. Anyone who wants the most versatile and sophisticated, yet easy-to-use capabilities of the DSLR will be flocking to digital imaging at a feverish pace. These buyers will be looking for books that tell them how to use their new digital equipment in creative ways. This revolution began when Canon introduced its Digital Rebel in late 2003, a 6 megapixel interchangeable lens single lens reflex that cost less than USD1000, with a lens. Nikon fired the next shot in January, 2004. These exciting new cameras were introduced at a time when glorified point-and-shoot digital cameras with fixed lenses and optical viewfinders could cost USD1000 or more. Such a low price point suddenly made digital photography more attractive to the millions of serious photographers who would settle for nothing less than an SLR, but who couldn't afford the USD2000 tariff on even the least expensive models. In addition, the presence of USD1000 SLRs on the market meant that everyone else's non-SLR models became much less attractive at that price.