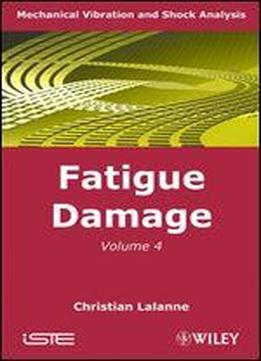 Mechanical Vibration and Shock Analysis, Second Edition Volume 4: Fatigue Damage Fatigue damage in a system with one degree of freedom is one of the two criteria applied when comparing the severity of vibratory environments. The same criterion is also employed for a specification representing the effects produced by the set of vibrations imposed in a realworld environment. In this volume, which is devoted to the calculation of fatigue damage, the author explores the various hypotheses and models used to describe the behavior of material suffering fatigue and the laws of fatigue accumulation. He also considers the methods of counting response peaks, which are used to establish a histogram when it is impossible to use the probability density of the peaks obtained with a Gaussian signal. The expressions for mean damage and its standard deviation are established and other hypotheses are tested. The Mechanical Vibration and Shock Analysis fivevolume series has been written with both the professional engineer and the academic in mind. Christian Lalanne explores every aspect of vibration and shock, two fundamental and extremely significant areas of mechanical engineering, from both a theoretical and practical point of view. The five volumes cover all the necessary issues in this area of mechanical engineering. The theoretical analyses are placed in the context of both the real world and the laboratory, which is essential for the development of specifications.