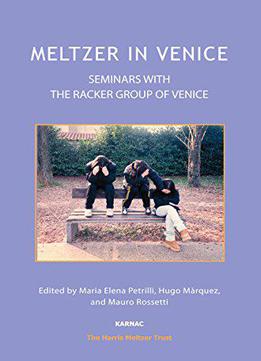 Meltzer In Venice: Seminars With The Racker Group Of Venice
by Maria Elena Petrilli / 2016 / English / PDF

This book focuses on adolescence and adolescent states of mind. It is one of a series that record Donald Meltzer’s clinical seminars and supervisions, which were conducted in various countries on a regular basis over many years. Despite his interest in the theoretical advances of psychoanalysis made during what he termed "The Kleinian Development," Meltzer believed that clinical supervision was the only way to teach psychoanalytic practice. In effect he treated supervision as an art form just as he regarded psychoanalysis as an art form. The library of his supervision work, almost all recorded outside the UK, thus forms a valuable teaching model for future practitioners, as well as demonstrating Meltzer’s wealth of insight into both character development and analytic technique. "My conviction that psychoanalysis is a form of art and does not prosper in institutions has increasingly been consolidated in recent years, and Bion’s idea of the work group has shown us the way forward. This book, which should interest all those in the field of psychoanalysis and its applications, is the product of the Racker Group of Venice, with whom I met regularly over the course of nearly two decades. The discussions are all descriptive and phenomenological and do not aspire to theory or a thorough list of current literature. The audience is urged to participate with questions and ideas. The result seems always to be interesting, often fun, and the atmosphere devoid of competition. The person who presents a case, often after a nervous start, is quite satisfied and, I believe I can say, finishes without ever feeling humiliated. The Racker Group is one of thirty similar work groups which came into being spontaneously in twenty different countries and which have attained complete autonomy. I like to consider these as, taken together, a flexible counter-institution whose atelier style is faithful to its founding inspiration, Socrates and the School of Athens." - Donald Meltzer