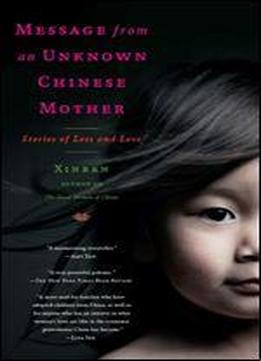 Message From An Unknown Chinese Mother: Stories Of Loss And Love
by Xinran / 2012 / English / EPUB

Following her internationally bestselling book The Good Women of China, Xinran has written one of the most powerful accounts of the lives of Chinese women. Her searing stories of mothers who have been driven to abandon their daughters or give them up for adoption is a masterful and significant work of literary reportage and oral history. Xinran has gained entrance to the most pained, secret chambers in the hearts of Chinese mothersstudents, successful businesswomen, midwives, peasantswho have given up their daughters. Whether as a consequence of the single-child policy, destructive age-old traditions, or hideous economic necessity, these women had to give up their daughters for adoption others even had to watch as their baby daughters were taken away at birth and drowned. Xinran beautifully portrays the extra-birth guerrillas who travel the roads and the railways, evading the system, trying to hold on to more than one baby nave young girl students who have made life-wrecking mistakes the pebble mother on the banks of the Yangzte River still looking into the depths for her stolen daughter peasant women rejected by their families because they cant produce a male heir and Little Snow, the orphaned baby fostered by Xinran but confiscated by the state. For parents of adopted Chinese children and for the children themselves, this is an indispensable, powerful, and intensely moving book. Message from an Unknown Chinese Mother is powered by love and by heartbreak and will stay with readers long after they have turned the final page.