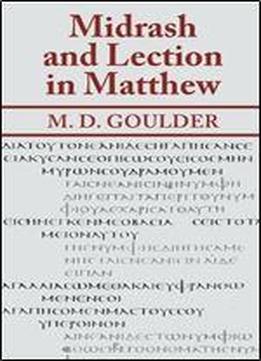 This challenging and original book questions the accepted conclusions of synoptic research. It argues, first, that Matthew is an adaptation and expansion of Mark by midrash - that is, by standard Jewish expository techniques - depending on no written source other than Mark, and only to a very small extent on oral tradition and, secondly, that Matthew was written to be read in Christian worship round the year, as a cycle of lessons following the Jewish festal lectionary. Part I establishes the characteristics of the Matthaean manner - his vocabulary, his rhythms and images, the form and mode of his parables. With so much typical of Matthew as a gospel, sources other than Mark become progressively less plausible. Part II is a commentary on the gospel from this base. It finds a basic Marcan text for each new unit and a reason for its development, and works out in detail the correspondence between the five teaching sections of Matthew and the five Jewish festal seasons of Pentecost, New Year-Atonement, Tabernacles, Dedication, and Passover. A striking piece of corroborative evidence is found in the section numbers of the old Greek manuscript tradition. Michael Goulder believes that lectionary schemes also underlie Mark and Luke, and that at least one major part of the Old Testament, the work of the Chronicler, has a similar character. A gospel, in fact, is not a literary genre at all, but a liturgical one. Matthew himself comes into focus as a converted Jewish scribe who possessed the substance of the Pauline teaching, and who has been the dominant influence in forming the Church's image of Jesus in his adaptation of Mark by midrash and through lection.