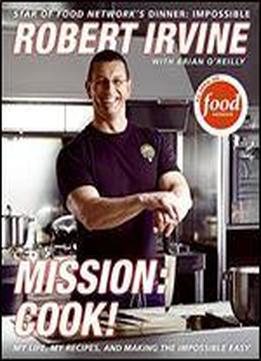 Mission: Cook!: My Life, My Recipes, And Making The Impossible Easy
by Robert Irvine / 2007 / English / PDF

Robert Irvine has led a oneofakind life. He joined the merchant marine as a teenager, and would go on to become a cook in the Royal Navy where he happened to befriend a man named Prince Charles. Since then, Chef Robert has gone on to cook for presidents, prime ministers, royalty and celebrities. It's been a remarkable life and career, ranging from cooking on the beaches of Yemen for thousands of refugees to making a sevencourse meal for First Lady Laura Bush and her friends on an aircraft carrier. Trained by the best European chefs, Robert also shares his cooking philosophy, his best recipes and tips on how to add that special twist to any dish.