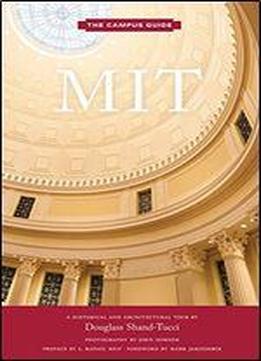 The Massachusetts Institute of Technology (MIT) was founded in 1861 as the cornerstone of Copley Square in Boston's Back Bay, then the center of a progressive, proto-globalist Brahmin culture committed to intellectual modernism and educational innovation. MIT founder William Barton Rogers's radical vision to teach by "mind and hand" was immediately successful. In 1916 MIT, growing by leaps and bounds, moved its campus to the nearby Charles River Basin in Cambridge, where it now stretches along the shore overlooking the Back Bay. MIT: The Campus Guide presents the history of the Institute's founding and its two campuses. Today, the campus is studded with buildings designed by noted architects such as William Welles Bosworth, Alvar Aalto, Eero Saarinen, I. M. Pei, Steven Holl, Charles Correa, J. Meejin Yoon, Frank Gehry, and Fumihiko Maki, among others. Alongside the architecture is a distinguished array of public art including works by Picasso, Henry Moore, Alexander Calder, Louise Nevelson, Frank Stella, Sol LeWitt, and Jaume Plensa.