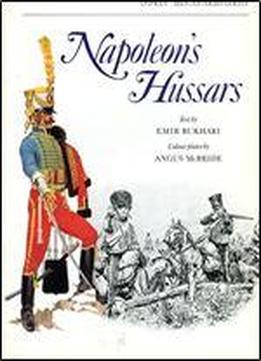 Napoleon's Hussars made their first real impact during the Napoleonic Wars in 1806, with their astonishing pursuit of the Prussians over 1,160km from the river Saale to the Oder in twenty-five days. They then capped this feat on arrival when, by dint of audacious demonstrations by the 500 men of the combined 5th and 7th Hussars, the 6,000-strong Prussian garrison was bluffed into capitulating its fortress at Stettin along with 160 cannon. This splendid volume by Emir Bukhari describes the organization, war records, dress and equipment of these most colorful of Napoleon's troops.