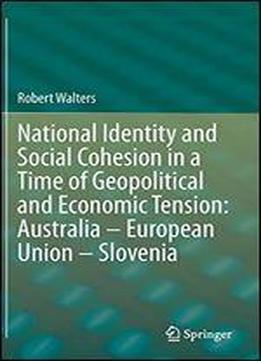 This book aims to enrich the thinking and discussion in relation to the importance that citizenship, immigration, rights and private laws play in the modern world. This is in a time when social cohesion and national identity is being challenged. It will explore the impact these laws have had on Australia, European Union (EU) and Slovenia. Identity and social cohesion are contested concepts and can invoke different responses. The challenges states and the EU are likely to face in retaining and even strengthening their respective identities and social cohesion from continued geopolitical shocks, security, economic volatility and environmental degradation is likely to be formidable. These alone pose some of the most complex political and policy issues facing the world. The EU can be held up as a polity that, has developed an identity and level of cohesion, while allowing member states to retain their national identities. It has, to date, also been successful in managing the rise of nationalism. However, that has come under threat in recent times. Thus, the very foundations of liberal democracy could be diluted from the impact of these challenges. Moreover, the basic foundations of rights have, in part, already been diluted from the rise of terrorism (which is acceptable), however, the geopolitical differences pose a significant challenge, in, and of themselves.