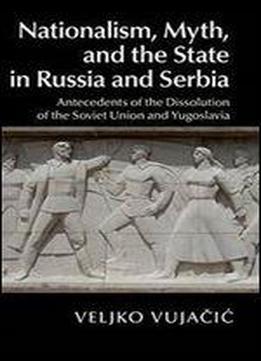 Nationalism, Myth, And The State In Russia And Serbia: Antecedents Of The Dissolution Of The Soviet Union And Yugoslavia
by Veljko Vujacic / 2017 / English / PDF

This book examines the role of Russian and Serbian nationalism in different modes of dissolution of the Soviet Union and Yugoslavia in 1991. Why did Russia's elites agree to the dissolution of the Soviet Union along the borders of Soviet republics, leaving twenty-five million Russians outside of Russia? Conversely, why did Serbia's elite succeed in mobilizing Serbs in Croatia and Bosnia for the nationalist cause? Combining a Weberian emphasis on interpretive understanding and counterfactual analysis with theories of nationalism, Veljko Vujai highlights the role of historical legacies, national myths, collective memories, and literary narratives in shaping diametrically opposed attitudes toward the state in Russia and Serbia. The emphasis on the unintended consequences of communist nationality policy highlights how these attitudes interacted with institutional factors, favoring different outcomes in 1991. The book's postscript examines how this explanation holds up in the light of Russia's annexation of Crimea.